#Snapchat and WPP have formed a new relationship to help AR and e-commerce gain momentum.

Snapchat has announced a new partnership with advertising giant WPP which will see the two work together on new projects that will facilitate the creation of AR ads for WPP clients, helping to advance digital ad options for many more businesses around the world, while also boosting Snapchat’s revenue potential.

As explained by WPP:

According to the press release, the partnership “combines Snap’s leading AR technology with WPP’s integrated capabilities across creative, media, commerce and technology,” enabling WPP clients to better connect with their customers on the Snapchat platform and achieve meaningful business results through augmented reality.

The inclusion of eCommerce is significant, since Snap is developing a number of new augmented reality technologies to aid in eCommerce discovery, including a growing number of digital ‘Try-on’ tools and virtual goods for digital avatars, a growing area of interest.

The primary goal of the partnership is the establishment of a new ‘AR Lab,’ which will make it easier for WPP customers to create AR ad campaigns using Snapchat’s sophisticated augmented reality capabilities.

Along with collaborating on new goods and technologies, Snap will provide information into user patterns and educate WPP employees on augmented reality’s developing tools and methods as part of its agreement with the advertising giant.

The collaboration will help WPP enhance its augmented reality capabilities via the AR Lab Academy, an industry-first training program focused on augmented reality products and technologies. Snap’s initiative hopes to certify at least a thousand WPP workers by the end of this year, thanks to their assistance.

The partnership is a big win for both WPP and Snap. WPP operates regional agencies in 110 countries, and works with many big brands, providing more opportunity for Snap to showcase its ad offerings to big spending businesses.

That will also give Snapchat more impetus, and resources, to continue its AR development, and with the arrival of AR glasses, and broader mainstream adoption of the tech, that could help Snap remain at the forefront of the next key shift, which will help advance eCommerce to the next stage.

And for WPP’s clients, the potential is clear. Recent research commissioned by Snap indicates that by 2025, nearly 75% of the global population, and almost all smartphone users will be frequent AR users. 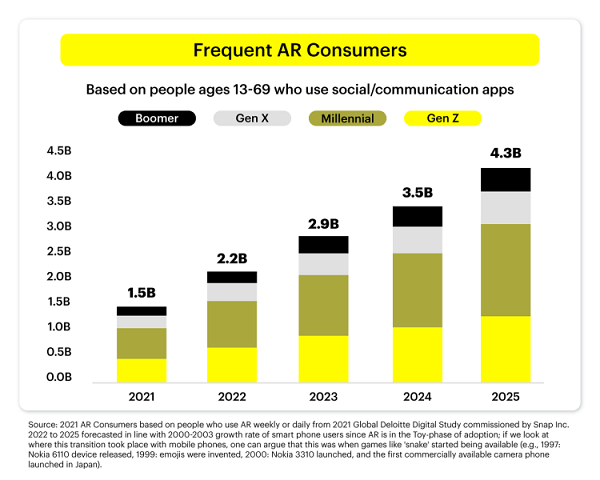 In addition to this, 94% of people are expecting to increasingly use AR for shopping purposes.

With advancing features, aligned with the rise of eCommerce, and new technology bringing AR into the mainstream, the partnership could go a long way in securing significant opportunities for both companies.

Previous #Instagram is experimenting with ‘Selected People’ for Stories, giving you more control over who sees your stories.
Next #With global search, room replays, and trimming, Clubhouse improves sharing.