Reddit continues to build on its marketing opportunities for brands, with the launch of a new ‘Conversation Placement’ ad option, which will enable bands to promote their products within its highly engaged post comment threads. 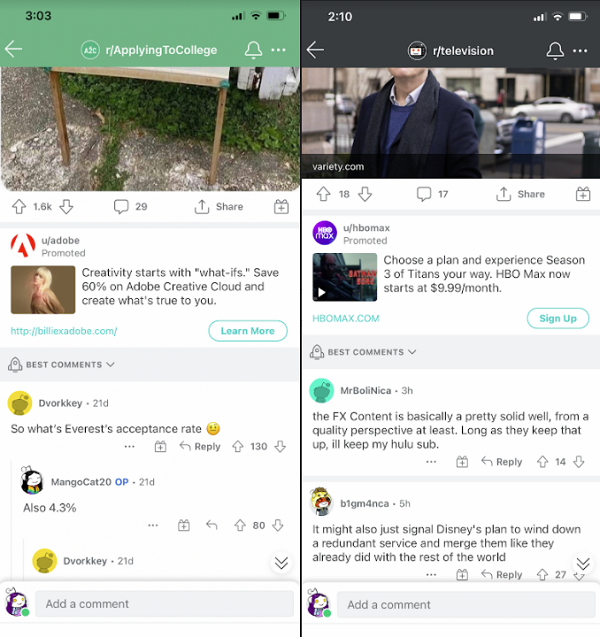 As you can see here, Conversation Placement enables businesses to position their promotion within relevant reply chains, beneath the original post and above the first comment. The option also includes a prominent CTA button to help drive response.

The core of Reddit is its community discussions, where the most engaged interactions take place across a broad range of hobbies and interests, 24 hours a day, seven days a week. ” It works in conjunction with Reddit’s in-feed advertising to reach even more users at the exact moment they are most receptive.” Conversation Placement enables marketers to engage with their consumers while these conversations are happening.

The site itself states that more than 350,000 discussions take place on the platform every day, and that Reddit users spend an estimated 42 percent (on average) of their total time in the app in the form of comment threads.

The more important issue is how Reddit users will react, and if it will be a welcomed and successful placement option for marketers.

Campaigns using Conversation Placement have had “substantial success” across all sectors, verticals, and marketing goals, according to Reddit, which conducted beta testing with over 600 partners to determine their effectiveness.

“When utilizing both Conversation placement and Feed, beta test partners experienced an average increase in clickthrough rate (CTR) of 9 percent, a 10 percent rise in downstream conversion rate (CVR), and a 23 percent decrease in Cost Per Click (CPC) rate.”

Reddit also adds that when Conversation Placement is utilized as part of a larger advertising strategy, in conjunction with its normal Feed advertisements, companies have been able to improve their total reach on the site by up to 20%.

This makes sense, given the possibility for simultaneous exposure, but you can see how using this strategy might help you get your brand and offerings in front of the appropriate people, depending on particular subreddits and the most active discussions inside each.

Perhaps, just by association, this will assist in driving better ad response, and there is data to indicate that the sheer number of mentions and exposures can help generate higher ad response, which is encouraging.

In terms of placement, some Redditors will no doubt be dissatisfied with advertisements appearing in their comment streams, but the majority are now more accepting of advertisements, thanks to the increased variety of placement options available across the web and the general understanding that advertisements are necessary to fund the services they use.

Considering that Reddit’s Conversation Placement option is now accessible to all Reddit marketers, it may be worth a shot.

Previous #Verification Guidelines for Facebook and Instagram have been updated as a result of this announcement by Facebook.
Next #Twitter is currently testing a number of new control options, including the ability to auto-archive old tweets and hide likes.