As part of its broader push to help maximize economic opportunity, and remove inherent bias from its systems, LinkedIn has refined the recommendation algorithm for its ‘People You May Know’ feature, in order to ensure that users are not adversely impacted by various factors – such as where they grew up, where they went to school, or where they work – in building their professional networks. 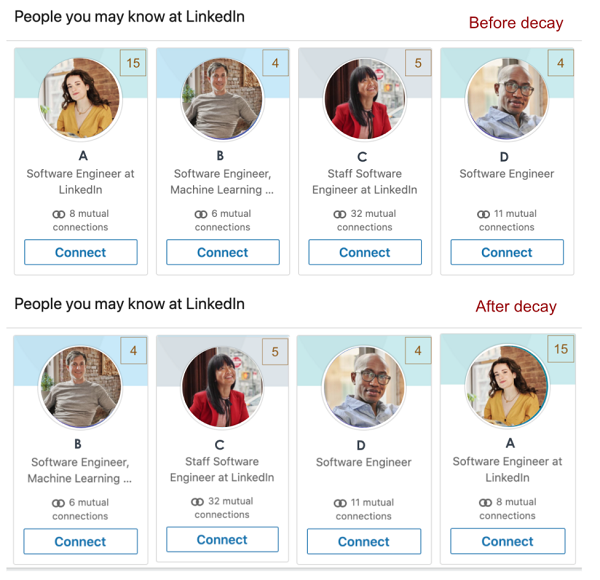 The platform’s ‘People You May Know’ recommendations can play a key role in guiding user connections, and as such, LinkedIn has sought to improve its systems to stop certain user types from dominating this element.

As explained by LinkedIn:

“PYMK primarily uses data like the Economic Graph and platform interactions to mine features and use ML algorithms to come up with relevant recommendations. However, like any AI system, a significant challenge for the accuracy of this system is controlling for external sociological factors, like a member’s general visibility off-platform or the tendency for technologies (such as professional social networks or the internet) to be adopted gradually. This can lead to situations where AI-powered products can reflect an existing bias towards some groups of people over others.”

For example, based on this process, more high-profile users will appear more often within these recommendations, because LinkedIn’s system uses platform interactions as a proxy for those others may want to connect with.

Which can disadvantage those with less visibility:

“There are a subset of members on LinkedIn who receive a large number of connection requests, e.g., an influencer in an industry, a high-profile senior executive, or a recruiter from a big company. At a high level, having a disproportionate number of connection requests may appear to simply run counter to our stated goal of closing the network gap. However, it can also lead to the member’s network becoming overrun with feed updates and notifications that may seem random or from members who are only tangentially relevant to their own career.”

Another key problem with this is that these people can be key connectors to opportunity, and it’s therefore important to highlight a broader spectrum of connection recommendations to these users to help maximize networking potential.

To address this, LinkedIn’s improved system now seeks to better balance recommendations to highlight people who are not seeing as many connections requests, helping to broader exposure through the function.

The result is that a wider pool of people are now receiving more connection requests, as opposed to the majority going to fewer members – which provides more opportunity for users to grow their networks on the platform.

In practice, this likely won’t have a major impact on your LinkedIn usage. According to its initial results, the update saw a reduction in the number of connection requests going to people who are often overloaded with them, while it also resulted in a small increase in the number of requests people going to less popular users.

But the broader impact could be significant. It only takes one important connection to boost your presence, and get in front of the right users, and by increasing the exposure potential within the app, that’s another step towards broadening opportunity, which could help more people find more valuable, important business connections.

As noted, the project is part of LinkedIn’s broader push to better facilitate equal opportunity, and give people more ways to find professional connections, without any potential disadvantages as a result of their background. That effort is being led by former LinkedIn CEO Jeff Weiner, who stood down from the CEO role last year to instead concentrate on “creating economic opportunity for every member of the global workforce”.

Which is a noble, and important, goal, and given the role that LinkedIn now plays in facilitating professional connection, it may well be in the best position to influence significant change in this area, using its data and matching tools to better cut through existing barriers to entry.

It’s a small element in that broader push, but each step is another advance.